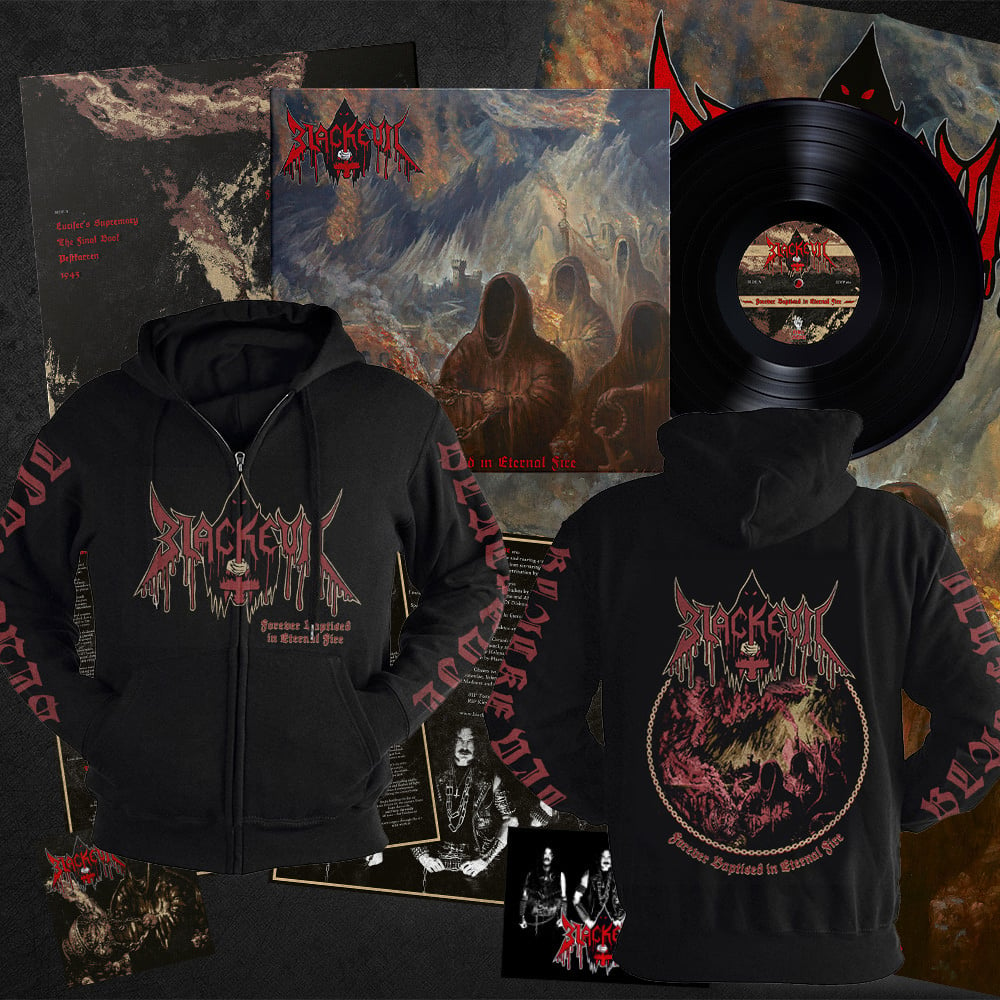 BLACKEVIL stay true to their roots yet transcend black/thrash with a new level of epicness.

T-Shirt:
Fruit of the Loom Valueweight (backprint of the jacket at the front)

Hailing from Bavaria, BLACKEVIL have been forging fire since 2013. Their first demo, appropriately titled Hail the Cult, emerged from the darkness in 2015, auspiciously revealing a razor-sharp and endlessly salacious style of blackthrash. Come BLACKEVIL’s debut album, 2017’s The Ceremonial Fire, the power-trio up-ratcheted everything: more speed, more hooks, more black, more evil, more of MORE! Diehards took notice, thankfully, and the band furthered the momentum the next year with a split LP with Italy’s esteemed Witchunter. Still, the best was yet to come…

At last, BLACKEVIL’s breakout moment arrives with their long-awaited second album, Forever Baptised in Eternal Fire. Of course, ones for astute titles, BLACKEVIL nevertheless lay it all on the line with Forever Baptised in Eternal Fire, bringing together their not-inconsiderable past with an envious present and doubtlessly damned future! Naturally, they’d never betray their roots – whether it’s the German thrash Big Three of Sodom, Kreator, and Destruction or evil speed metal legends like Razor, Evil Angel, OZ, and Exciter, and plenty of other classic points in between – but the way the trio assimilate them into something that’s so uniquely their own and yet so uniquely and purely HEAVY METAL, we can only guess there’s some black magick at play. Put another way, Forever Baptised in Eternal Fire is fucking EPIC from beginning to end, but it never sounds like it’s straining to sound “epic.” Likewise, one could charitably qualify BLACKEVIL here as transcending blackthrash altogether, so creative is this idiosyncratic iteration of the idiom…but even then, that’s selling both band and record short.

All we can say is simply step into this eternal fire, feel the witching-metal leads course through your veins, the throttling yet tastefully nuanced drums guide your quest, and allow bassist Abyss’ commanding and increasingly charismatic vocals to lead the charge; try to resist ALL THAT, and try remaining metal to the bone. Won’t work! Suitably for such a classic-in-the-making, Forever Baptised in Eternal Fire is baptized with (un)godly cover art by the masterful Paolo Girardi. Make no mistake: BLACKEVIL have ARRIVED!